HomeBlogEthics in Cannabis with Dr. Jonathan Newman
LIGHT
AUTO NEXT 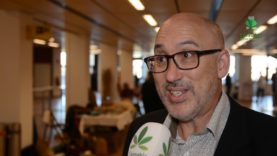 At the International Cannabis Policy Conference organized by FAAAT, we got to interview Dr. Jonathan Newman. Dr. Jonathan Newman is a social anthropologist at the University of Sussex, where he researches the cannabis industry in Europe.

You may have heard about the Paris Agreement before, as Trump famously said he would withdraw the United States of America from the accord. However, the rest of the world is still very much in favor of the Paris Agreement which deals with climate change. The Paris Agreement is an agreement within the United Nations Framework Convention on Climate Change (UNFCCC) and starting in the year 2020. This too will affect the cannabis industry.

How will the cannabis industry contribute to the Sustainable Development Goals (SDG)?

At the Paris Agreement in 2015, leaders agreed to 17 ambitious Sustainable Development Goals (SDGs) to achieve by 2030.
These goals focus on ending poverty, fighting inequalities and stopping climate change.

As industrial hemp becomes legalized across the globe, as well as medical and recreational cannabis and even the WHO agrees, the cannabis industry is going to have to abide by these Sustainable Development Goals too, argues Dr. Newman.

And he has a point. In Canada, the legal market needs to abide by strict packaging rules which aren’t environmentally friendly. Growing indoor cannabis, but also outdoors, can also put a strain on the environment. Whether through poor water management, use of pesticides and vaping. Vaping is arguably more healthy for the individual but becomes a strain on the environment thanks to the materials used and especially non-reusable batteries.

The cannabis industry has come a long way, but can lead the way by example too into the future.