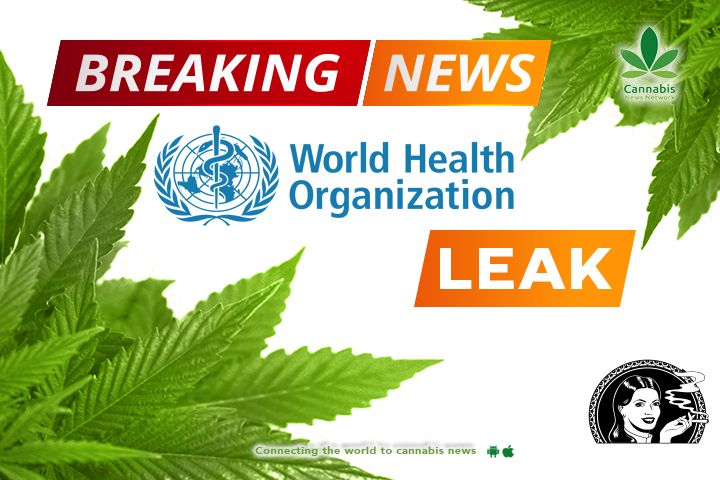 The report is groundbreaking as it advises the United Nations drug organization to withdraw cannabis from list IV of the UN drug treaties and to delete products containing cannabidiol (CBD) and less than 0.2 percent THC altogether from the schedules.

Alfredo Pascual, a reporter of Marijuana Business Daily, writes that he has a “reviewed copy ” of the long-awaited WHO advisory report, which has not yet been published. According to him, the most important recommendations are:

The scheduling of cannabis in the international drug control conventions would not be as restrictive as it is today, because it would be removed from Schedule IV of the 1961 Convention.

THC in all forms would be removed from the 1971 Convention and Placed with Cannabis in Schedule I of the 1961 Convention, significantly simplifying cannabis classification.

Pure CBD and CBD preparations containing no more than 0.2% THC would not be included in any international drug control conventions.

Pharmaceutical preparations containing delta-9-THC, if they follow certain criteria, would be included in Schedule III of the 1961 Convention, recognizing the unlikelihood of abuse.

If this information is correct, it is no doubt historical news. An early response came from Manu Caddy, boss of the New Zealand cannabis company Hikurangi Cannabis. He also has a copy of the advisory report, reports Voxy. Caddy: “It is pleasing to see the WHO review of the evidence for cannabis and that it should be classified as heroin, cocaine, and methamphetamines. Unfortunately, the classification of cannabis in the 1961 UN Convention is in prohibition as the default policy. Meanwhile, the problem is that people are moving towards a real-regulated regime.”

What this means for medicinal use of cannabis and CBD

The Voxy article contains a number of literal quotations from the WHO advice. About the drugs that are now on List IV with cannabis: “Use of all these substances is associated with a significant risk of death, whereas cannabis use is not associated with such risk. “

About medicinal use of cannabis: “In addition, preparations or cannabis have shown therapeutic potential for treatment of pain and other medical conditions such as epilepsy and spasticity associated with multiple sclerosis. In line with the above, cannabis and cannabis resin should be scheduled at a level of control that will prevent harm caused by cannabis and cannabis. medical use. “

About cannabidiol (CBD): “Preparations containing predominantly cannabidiol and not more than 0.2 percent or delta-9-tetrahydrocannabinol are not under international control. “

The WHO advice on cannabis was initially expected in December 2018: see our report below. The question now is whether the Commission on Narcotic Drugs (CND), the United Nations drug organization, will respond to this groundbreaking opinion at its annual meeting in Vienna in March.

We called the WHO press office for a response, but they were unable to do so yet.

UPDATE: response from the WHO, Februari 1

The WHO replied to our request with the following:

The WHO Expert Committee on drug dependence met in November last year to review cannabis and its components. It recommended a less strict level of international control of cannabis because of the evidence that cannabis preparations have therapeutic value.

Current scheduling of cannabis is as strict as that for heroin. Keeping cannabis at that level of control would severely restrict access to and research on potential therapies derived from the plant.

At the same time, the Committee recognised the potential for harm and abuse associated with cannabis use.

The Committee recommended a number of changes to scheduling of cannabis components e.g. CBD in order to facilitate medical use of cannabis-derived pharmaceuticals and enable better implementation of international cannabis control by countries.

It is not within the WHO mandate to advise countries on their own internal control including legalisation of cannabis. According to the 1961 Convention cannabis must be controlled by the signatory countries.

The role of the WHO ECDD is to provide recommendations to the UN on harms and benefits of psychoactive substances and on whether they should subject to international control.

Thanks to Marijuana Moment, we also have the letter from the director general of WHO to António Guterres, Secretary-General of the United Nations.