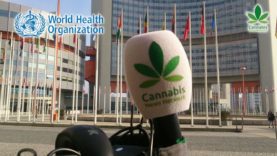 Since 1961, the United Nations considers cannabis as a Schedule I drug with “no accepted medical use and a high potential for abuse.” The plant is scheduled as a dangerous drug, like heroin, in the Single Convention on Narcotic and Drugs. But things are about to change.

Now in 2018, we were present at the Commission on Narcotic Drugs 61st reconvened session in Vienna to watch the recommendations how to reschedule cannabis, presented by the WHO.

This is our first of two parts of our recent trip to Vienna. We are due to publish part two soon about the International Cannabis Policy Conference organized by FAAAT and the Knowmad Institute which took place simultaneously with the UNODC meeting.