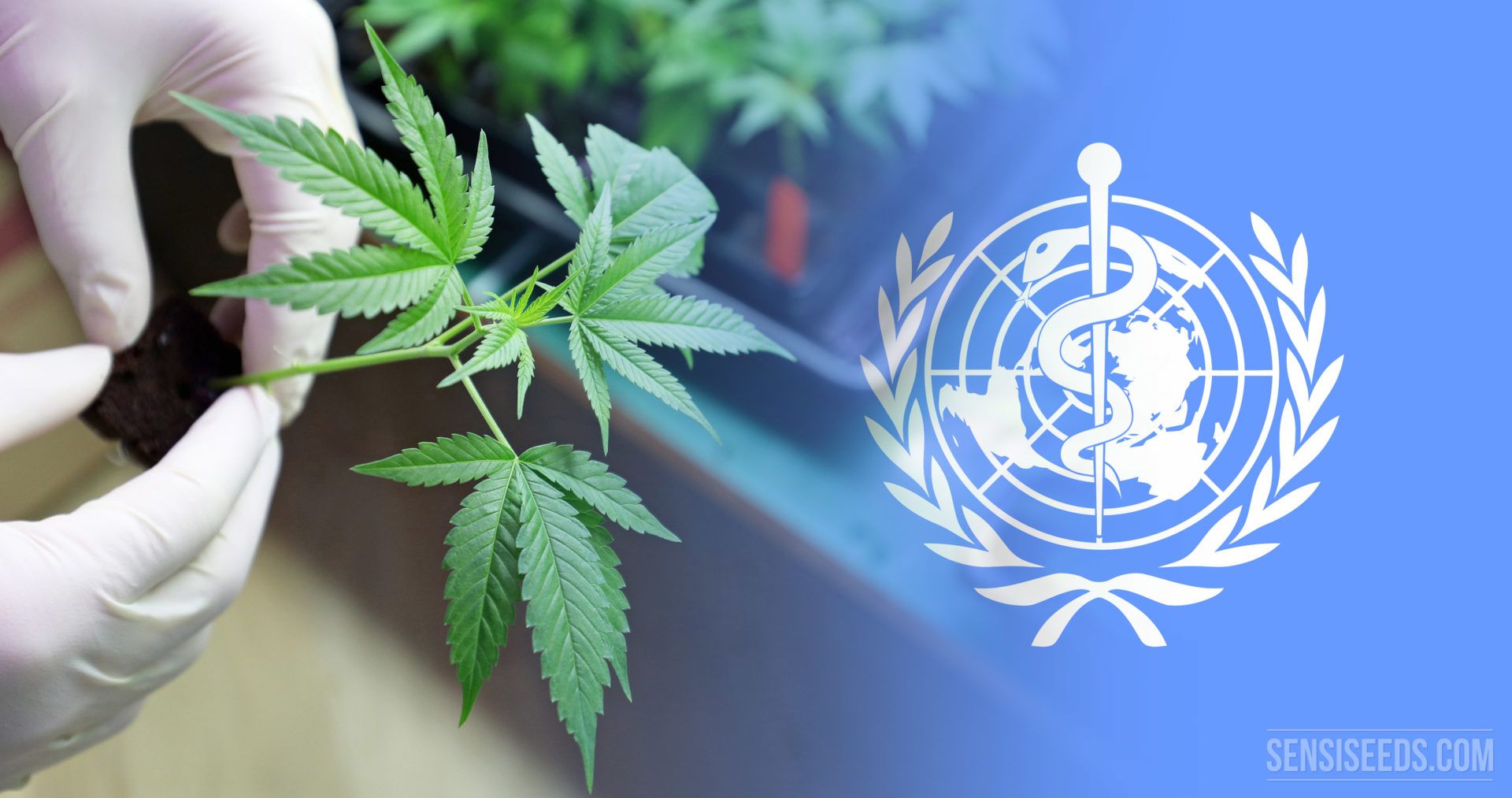 Anyone who has ever done research into why cannabis and other substances are considered illegal will have stumbled upon the so-called narcotic scheduling.

Generally, all countries follow the classifications from the UN conventions of 1961 and 1971. Countries must follow by passing laws to carry out the provisions of the UN Drug Conventions. For instance, even the US scheduling system is fully based on the conventions’ classification schedules

Embedded above our item we made on the UN back in 2016 for reference.

Scheduled substances rarely get rescheduled, but there’s hope on the horizon for cannabis rescheduling

The UN Commission on Narcotic Drugs (CND) is advised by the World Health Organisation (WHO), which for the first time is discussing the current scheduling of cannabis. On July 23rd, Tedros Adhanom Ghebreyesus (Dr Tedros, Director-General of the WHO) sent a letter to all the countries who signed on the 1961 and 1971 conventions. Following the outcome of the 40th meeting of the WHO’s independent Expert Committee on Drug Dependence (ECDD) dedicated to the scientific assessment of cannabis and its derivatives, pure CBD was recommended to not be included in the treaties schedules anymore. However, cannabis resin, extracts, tinctures (and even CBD-rich extracts), THC and THC isomers will continue to be reviewed in November.

Embedded above our interview with Raphael Mechoulam, who isolated THC for the first time in 1964.

The next step is, therefore, the so-called ”critical review”, the final part of the assessment which will eventually end up with cannabis rescheduling, on the ECDD’s 41st meeting from 12th to 16th November 2018. The result of this meeting will be made public on December 7th during the International Cannabis Policy Conference organized on the occasion by FAAAT.

The final hurdle needs to be taken in March 2019, when the CND will adopt or reject the recommendations of the WHO’s ECDD.

Embedded above our item on the WHO, published in 2014.

Most knowledgeable on the WHO and international scheduling issues is FAAAT (For Alternative Approaches to Addiction, Think & do tank), an international advocacy and research NGO. As such, we asked Kenzi Riboulet-Zemouli (French-Catalan drug policy reform advocate and researcher at FAAAT) a couple of questions.

CNN: Hi Kenzi. Thank you for taking the time to answer our questions. What has been your role at FAAAT?

Kenzi: Since 2014, I joined the long-time activists Michael Krawitz and Farid Ghehiouèche, and we started to work together in favor of downgrading the level of control of cannabis (and its associated prohibition) imposed to all countries by an international treaty dating back to 1961. Historians have shown – and our own research has confirmed – that the roots of cannabis prohibition and the whole drug control system dated geopolitical arrangements of the early XXth Century that was more led by moral considerations than by evidence, the science of public welfare.

CNN: What have you achieved so far?

Kenzi: We essentially managed to push the WHO to its commitments, and have this mega bureaucratic structure start this process that they refrained to undertake since 1961. We also used our research and knowledge to share with other stakeholders, and invited all interested parties to get involved in this process, from countries with an important history linked to cannabis, to patients groups or doctors and research hubs.

What we are more thanked for, was to save the pre-review in June, by compiling in only 4 days the hundreds of errors and bias in the WHO reports, in a 36-pages document co-signed by more than 130+ NGOs worldwide. But this is the most visible part of our work, and we are personally much prouder of some actions undertaken, that have moved the lines but received no publicity.

We render part of our work online on www.faaat.net/cannabis

CNN: How significant can these proposed assessments be?

Kenzi: Concerning cannabis, the ECDD has announced that they are likely to recommend to take cannabis (the bud) and resin (hashish) out of the Schedule IV of 1961 Convention – the so-called Prohibition Schedule.

The WHO taking out cannabis & resin from the prohibition schedule will be a direct amendment of the Convention. Even though countries will not be obliged to translate it into their national legislation. However, it will be a statement of guilt for the WHO and the whole UN drug control system, that has firmly defended since 1961 the need to ignore the medical use of cannabis and to eradicate the plant and its “recreational uses”.

This would be the end of mandatory prohibition globally.

CNN: What are your expected outcomes?

Kenzi: We had one expected outcome: changes. For us, sticking to the level of control and prohibition based on pre-1961 science (so before even the identification of THC) was unsustainable any second longer. It was particularly unsustainable for us, being aware and in contact with so many people for whom cannabis and cannabinoids can be medically very useful. Our expected outcome was to have the WHO do what they are doing.

Now, any change will be welcome, and we trust the experts to take the right steps.

Beyond this issue, what we have been expecting, and already starts to get realized, is the opening of the topic. The placement of cannabis in the “Prohibition Schedule” has blocked almost everybody from doing anything with cannabis. Stepping away from this exceptional status will open the doors to a real, honest and inclusive debate on cannabis. And this will begin with the UN, which will finally be allowed to address cannabis-related issues from a Human Rights perspective with the UN Human Rights Council, from a social perspective with the UN Development Program, from a biodiversity perspective with UN Environment Program, etc…

CNN: What if the proposed assessments get rejected?

Kenzi: Then – as the begrudged Nikki Haley said – we will collect names!

Let’s see if the countries dare to reject the recognition of the real therapeutic value of cannabis and the reevaluation of its harms based on evidence. If some countries do and manage to tip the balance in the wrong direction, then it will be up to advocates and activists to do the job at the national level.

CNN: More personal, what are your motivations to do your research?

Kenzi: I believe that failed drug policies have been a major element inhibiting social justice, within countries and between countries. Prohibition and repressive policies not only violate a fistful of human, civil and political rights. They also create chaos and violence, hamper health and foster poverty and exclusion. I work on cannabis policy reform because it is the best way to build resilient and sustainable societies.

CNN: What can our readers do to help?

Kenzi: Of course it is essential to be ready to pressure all the governments of the 53 countries that will vote on the WHO ECDD recommendations, and have them commit to shit on the roof.

Of course, we encourage you to check out our website, support us, donate if you can, share the information with all relevant stakeholders… and be there in December (7th-9th) in Vienna at the International Cannabis Policy Conference to elaborate together future cannabis policies that count with us and that respect humankind and the planet!

We will continue to follow policy developments by attending and reporting from the United Nations Commission on Narcotic Drugs (from 5-7 December) and the International Cannabis Policy Conference in the United Nations quarter of Vienna, from 7th to 9th December 2018. This global interdisciplinary gathering of the greatest minds from the field of cannabis policy and industry will work on linking the future of cannabis laws to Sustainable Development, in the context of the UN Sustainable Development Agenda. ENCOD, VOC, and many other NGOs are partners of this event.

Canada: Cannabis / Weed is legal! The Netherlands: War on drugs!